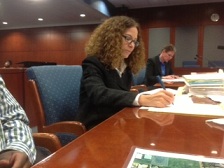 You Have The Right To Remain Silent And You Should Use It:

If you are approached by the police, or are arrested for a criminal offense, do not make any statements to the police and do not talk to anyone about the case.  This includes friends, family, neighbors and girlfriends or boyfriends.  You have the constitutional right to remain silent, and you should exercise that right at all times.  If you are questioned by the police, you should affirmatively state that you are exercising your right to remain silent and you should contact an attorney.

Even innocent clients get themselves in trouble by giving voluntary statements without an attorney present.  For this reason, the first person you speak with should be a skilled criminal law attorney.  Contact Us today to learn more about how Russo & Prince, LLP, can help you with your criminal law matter.

Many people believe that it is better to talk to the police and try to convince them of their innocence, but this is not a good idea. In most cases, although the police will try to convince you that it is in your best interests to talk to them, the truth is that, once you are being questioned, the police are not on your side.  The goal of the police officer is to obtain admissions or confessions which can be used to prove the charges against you. It is not their goal to find the "truth" and then leave you alone. If you do not give any statements to the police, you may still be arrested, but you will be in a much better position to defend the charges against you or negotiate a favorable plea deal.

If you are arrested in most cases you will be able to be released on bail. See below for information about bailing out of custody.

Posting Bail: What You Can Do To Get Out Of Custody

If you are arrested for a criminal offense, in most cases you will have a chance to bail out. The amount of bail varies depending on the severity of the offense. You should contact a bail bonds person. You typically will have to pay 8% to 10% of the total bail amount to obtain a bail bond. Most bail bonds people will work with you regarding the fee and will agree to a payment schedule. See our Criminal Law Resources page for a referral to a bail bonds person who can help you post bail in Solano and surrounding counties.

You will also have an opportunity to seek a reduction in bail, or release on your own recognizance (OR) or supervised OR (SOR) at the arraignment hearing which must take place within 48 hours of your arrest.

If you are charged with a criminal offense, you are likely facing a potential jail or prison sentence. You will definitely benefit from having a good criminal attorney by your side. The power of legal counsel is so great, that you have a constitutional right to an attorney. If you cannot afford a private attorney, and if you meet the county's requirements for indigency, you can have a public defender (or in some cases an approved private attorney) appointed to represent you.

What can a lawyer do for me?

A lawyer can guide you through the criminal process, investigate the facts and research the law in order to develop potential defenses to the charges, attend all your court hearings and argue your position to the judge, file motions to have the charges dismissed or reduced, negotiate with the District Attorney on your behalf to try and resolve the case, counsel you regarding your options, and represent you at trial if the case does not resolve.

A skilled criminal appeal attorney can also counsel you concerning any possible opportunities you may have to appeal unfavorable rulings in your case.

The District Attorney will consider several factors in deciding whether to offer you a plea deal, and what that deal may be.  Contrary to popular belief, many cases are resolved through plea bargaining between attorneys, not through a contested trial. This makes having an experienced and knowledgable attorney during the plea negotiation stage extremely important.

What factors will influence your plea deal?

Factors effecting plea bargain negotiations include the nature of the crime, seriousness of the offense, strength of the prosecution's evidence against you, any prior criminal history, the specific facts surrounding the alleged crime, and any procedural defects relating to the manner of your arrest or questioning by the police. Also important is the influence of what are known as 'mitigating factors' which, although they may not absolve you of criminal liability for the alleged crime, may warrant some type of leniency notwithstanding your guilt.

Every case has 2 fundamental issues, 1) the issue of guilt or innocence of the crime charged, and 2) the appropriate sentence. Often there are mitigating factors which warrant leniency even if you committed the crime with which you are accused. Mitigating factors might include drug or alcohol addiction, mental health issues, previous trauma, or severe economic or emotional distress.

A good lawyer will seek to determine any and all mitigating factors that may influence your case, and will use these factors to get you a better outcome - either by negotiating with the District Attorney or by arguing your case to the judge for leniency at the time of sentencing.

Here are just a few of the potentially important motions that a criminal law attorney can bring on your behalf:

Motion to Reduce Bail or for Release on your Own Recognizance: Such a motion seeks to obtain a lower bail amount or your release without posting bail, to enable you to get out of custody sooner.

Motion to Suppress Evidence: If the police detained you without reasonable cause, arrested you without probable cause, or otherwise violated your rights to privacy and to not be subjected to unreasonable search and seizure, the remedy is a motion to suppress evidence. If successful, such a motion results in the suppression, i.e., exclusion from evidence, of any physical items of evidence, statements made by you, or other evidence which was obtained as a result of the unlawful detention, arrest, or search and seizure.

Motion to Dismiss: After a preliminary hearing in a felony case, a motion can be made to dismiss the criminal charges if the evidence at the preliminary hearing was insufficient to establish probable cause that you committed the offense with which you are charged. If successful, such a motion results in the dismissal of the charges. In a misdemeanor case, a motion to dismiss can be granted in the interests of justice.

Sentencing Motions: Various motions can be made at the time of sentencing, including motions to reduce the charges from a felony to a misdemeanor, a motion to strike a defendant's prior strikes under California's Three Strikes law, and if warranted a motion for new trial.

Our criminal attorneys are also skilled and experienced in both civil and criminal appeals who have won numerous successful criminal appeals for their clients.  Contact us today for a free consultation regarding your case, and what we can do to help you.